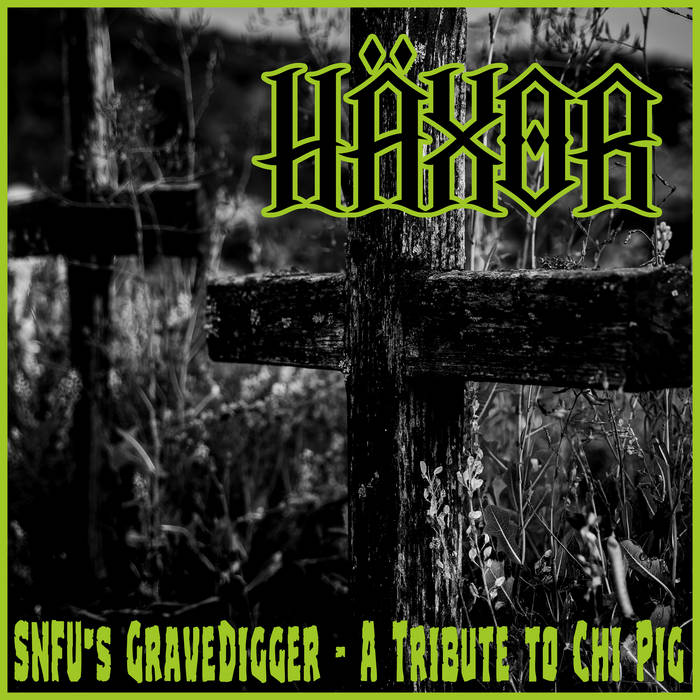 August 2020
Why we covered “Gravedigger”. Sean Tracy of Häxor.

Buckle up. This is a long one. I’m going to tell you why a Stoner-Metal-Doom band in the year 2020 has recorded a cover version of a 35 year old skatepunk song.
I briefly met SNFU frontman Chi-Pig, a.k.a. Ken Chinn only once. It was in Toronto, and it was I believe 1984. No… maybe 1985?. I was 16 years old (?) and I was fronting a thrashy teenage Hardcore band called the Lab Animals. We were on the opening slot of a bill that if memory serves, was headlined by SNFU, with Immoral Minority from B.C., Toronto’s BunchoFuckinGoofs, and us little Lab Animals from the Scarberian ghetto. And again, my foggy memory tells me that it was a hall show in either the Latvian Hall or the Lithuanian Centre or something like that. It was an all ages gig, with no licensed bar, yet the liquor and drug consumption outside the hall doors was at epic levels. Sadly, it occurs to me that I might be conflating two similar events…but the point is the same.

It was crappy venue with bad sound, and I remember that the house lights couldn’t be dimmed….because there was no stage lighting. To add to the bizarre energy of the mixed aged crowd was the presence of a faction of the Para-Dice Riders outlaw motorcycle club, who were in attendance because of a family connection to the guitarist for the Goofs.
Metro Police cars were circling the neighbourhood like Hammerhead sharks and the energy was weird, aggravated, frantic and foreboding. And all of that before anybody even took the stage. In that era, it was very common to have these kind of gigs run on a shoestring budget, in an unsuitable venue and carried out in an aura of combined anxious dread and youthful joy.

So it was in that setting that I met Mr. Chi-Pig, briefly, and over 35 years ago. Truthfully all I vaguely remember of our brief interaction was his quiet intensity and cutely demonic smile.
I do remember that SNFU absolutely KILLED that night, and that I ended up running and hiding from the police in the early morning hours for mouthing off at a passing squad car. I imagine those sort of summer nights played out in a similar fashion for many of you who are still reading this.

When Ken Chinn passed-on to the great pig stye in the sky in July 2020, I wouldn’t describe my reaction to the news as being anything like the reactions of grief or loss felt by his family, bandmates, or confidantes. But rather, I met the news with a type of resigned sadness for the man’s departure, but also a certainly selfish sense of nostalgic reverie for “back in the day”. In the weeks after Chi’s death, I found myself dipping back into 1980’s punk albums that I hadn’t listened to in years. It won’t be the “end of an era” until all of us old Punks are dead; but it sure felt like a moment to reflect on the mortality of our once invincible selves.

Also “back in the day”, John Phillips (Häxor drummer) was a skater kid from working class Calgary who was immersing himself in the underground music culture of his city, playing in bands like Vertical Urge and Death Watch.
I know that, he too was grinding it out and paying his rock’n’roll dues by playing sketchy gigs, working with less than ideal equipment and sweltering practice spaces. And putting in hard hours on his skateboard. He too had the opportunity to open up for SNFU while gigging in a teenage band. In his case it was at the Victoria Park community hall in Calgary.
And with SNFU’s elevated position in the Alberta scene, they loomed large in the aspirations of young Punks like John, and other kids all the way from Medicine Hat to Fort Whateverthefuck.
You see, that’s the thing about SNFU and that era of Hardcore Punk in Canada. They are inseparable subjects. Back in our pre-internet youth, SNFU by virtue of their clever musicality, high energy and live performance reputation, had managed to become an internationally known and perhaps even revered, Canadian punk rock force. All in the days of trading boot-leg demo cassettes and Xeroxed fanzines by terrestrial mail.
Musically (especially in Canada), SNFU sat amongst a nexus of important bands who were honing the leading edge of the movement in Hardcore music from the post-Sex Pistols fashion-punk and the brooding UK-82/Oi wave of bands, towards a more melodic, faster, lyrically clever and perhaps more athletic rock sound that was emerging on the west coast of the continent.
My view of it, was that as this new Punk inertia pulsed and skated forward into suburban basements in the mid-Eighties, it underwent a recombination with elements of early metal music and other aggressive and protest fuelled American sounds.
So, as old-time Metalheads like John and myself continue to gig and record underground music into our fifties, we can see the line tracing back to our roots in the punk scene and the role SNFU had in giving inspiration to the crossover of Metal, Skatepunk and independent Rock that led us to the genres of heavy music that we ourselves perform today. 20 years into a new century.
I also want to make note that our own (Häxor bassist) Liam Phillips is John’s son, and a fan of SNFU. It feels sort of time-warpy to me when I contemplate how we have a second generation of gigging musicians who were raised on this music. But here we are.
When John proposed doing a Häxor version of SNFU’s “The Gravedigger”, it seemed immediately like an appropriate choice of song. A song that embodied threads of all that heavy music DNA that had inspired and informed and kickstarted our own musical adventures.
That’s why we recorded and are now releasing this cover song. Not just to mark Mr. Chi-Pig leaving the stage, but to also to celebrate SNFU’s role in our youth, our underground music culture in Canada and our adopted home town of Edmonton.
Punk’s not dead.
Perhaps a little stiff jointed though.
Long live Rock & Roll, …you fuckers.

Häxor is a Stoner Metal trio based in the frigid wastes of Edmonton Alberta, Canada. They offer up a witches brew of Bluesy Doom, Old School Metal, and Thrashy Groove with an underlying Punk sensibility.

Bandcamp Daily  your guide to the world of Bandcamp